Connect
To Top
Beating the OddsOctober 22, 2015 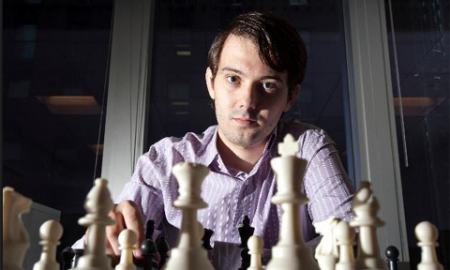 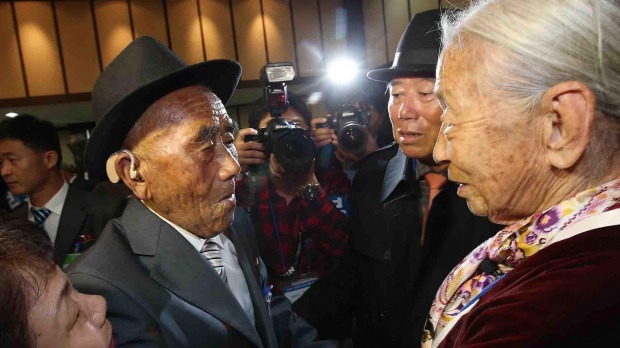 In the west, we often think of the distance that separates us from family around the holidays. We think of the miles and hours it takes to travel over the river and through the woods to grandmother’s house and the places we’ve left pieces of our hearts. We’re fortunate though that even though our nation is vast, it’s not divided by barbed wire and minefields, machine guns and artillery pieces. Such is the case on the Korean peninsula where today marks what will be the last time many families will ever see one another.

This week marked an increasingly rare event in North/South relations when the North Korean government agreed to allow roughly 1000 family members to meet and reunite briefly at the Diamond Mountain resort in North Korea. Among them was a couple who refused to let the DMZ come between their love for one another.

Among the most tearful and heartfelt reunions was that of Lee Soon-Kyu, 85, and her husband, Oh Se In, 83. Married in 1950, their love was put to the test just months later when North Korean soldiers invaded South Korea. 5 months pregnant, Lee Soon-Kyu and Oh Se In were caught up in the chaos of war. He eventually ending up in North Korea, and she and her son in South Korea when the truce was signed in 1953. 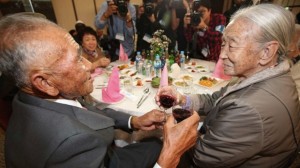 This week was the first time the two have seen each other since war tore them apart. In a moment that left many in tears, Oh Se In embraced his son, Oh Jang-gyun, for the first time in his life. Moments later, Lee Soon-Kyu turned ot her husband and remarked through tearful eyes “I can’t tell you how much I missed you, I have wept so much thinking of us that there are no tears left in me.” Lee, who never remarried, continued by saying, “My dear, I didn’t know that the war would do this to us.”

The reunion was short; a mere three days in a lifetime that has already passed. Before separating for what will most likely be the last time, Lee Soon-Kyu gave her husband a gold watch for him to keep. Inscribed on the bezel, the names of three people whose love for one another proves that time, distance, and barbed wire are no match for the power of love. 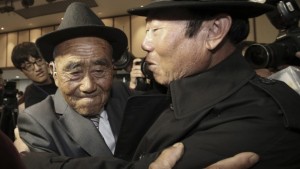 Oh Se In and his son, Oh Jang-kyun embrace for the first time in their lives. Photo Courtesy of AP.